An update! Okay, it's not much of one, but I haven't had much time at the desk recently. 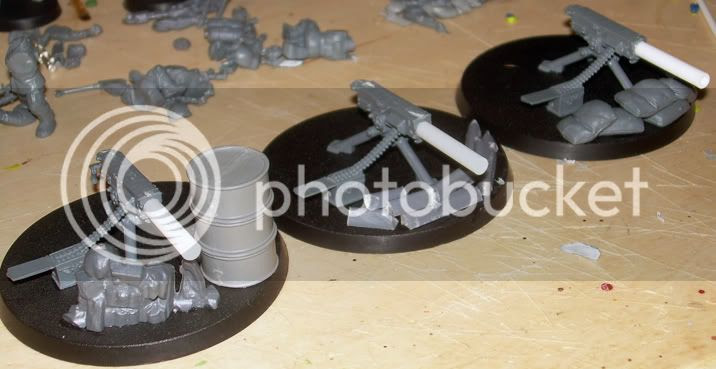 Wheee. The middle one is going to get basing over top of the sprue to try and make it look like they've dug themselves a shallow gun pit.
Posted by Malcolm Wilson at 8:05 PM 8 comments:

So based on the time I have left before Astronomi-con Vancouver '09 (now visible in the handy-dandy counter on the right), and the rumours that have been floating about the internet, specifically the reduced cost for basic guardsmen, I went back and modified my army list. It's reprinted below, but as a summary I increased the two core Platoons to four squads and a Fire Support Squad with Heavy Bolters, and the third Platoon is made up of the Orphans.

Meanwhile, the Forgeworld artillery, the Thudd Guns and Medusas, have been dropped in favour of two Leman Russes and a pair of Mortar Support Squads. This still leaves me slightly short on points, but I expect that my rumour-based estimations are going to be under in some places and over in others, so I'll just have to paint extra stuff to cover the eventualities.

To the everlasting glory of the infantry.

Here's the work in progress Commissar for Green/Command. 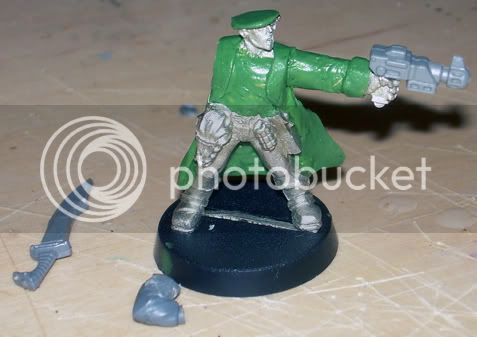 Some more Highlanders in progress. Four riflemen and a flamer.

I amalgamated all the War Orphans into one basic platoon.

And the lascannon that's going into the Command Squad. 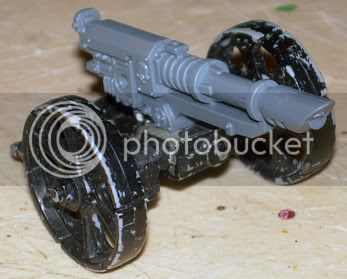 Reading Bell of Lost Souls' latest Codex: Imperial Guard rumours has confirmed something I've been suspecting for a while: I'm going to need a lot more infantry. Possibly almost double what I'm currently planning for since the rumours suggest Infantry Squads are going down in price by about 40%. The only things I know will be remaining the same cost are the Forge World choices I'm planning on using (Medusa emplacements and Thudd Guns). Hopefully the reduced point cost will mean I can include at least one squadron of Rough Riders in my 1500 point list!

- Command Squad Boxes will include all the special weapons in plastic (1 of each), 3 different officer heads, several different close combat weapons (Swords, Fists etc), various embellishments, 2 suits of officer armor, one more practical one more dressy, and 4 Cadians with a few new/special heads.

Given this rumour, I think I'm going to hold off on making my HQ squad until the new plastic Command Squad box comes out so I can make use of all those bits...

- Commissars still exist in a capacity different to what they do now. They are allowed to attach to certain squads. However once a Commissar Lord is taken they have more freedom and there can be more of them. They are also cheaper(almost half of what they are now).

This will reduce my used points even further! I doubt I'll be using the Commissar Lord, but I do intend on having at least one Commissar per Infantry Platoon.

- IG Sniper Squads, in addition to getting infiltrate, stealth, rangefinders, and sniper rifles will also get camo cloaks.

If this is true, I will most definitely be trying to fit one of these in. Snipers and scouts were very prevalent on the Western Front, and the Canadians who excelled in these roles (especially the First Nations snipers and scouts) helped cement the Canadian Corps' reputation as frontiersmen.

- Support Squads are different now and are platoon attachments not command squad attachments.

Again, I hope this is true, and if it is I'll be making use of it!

I'm kind of on the fence about this one. I don't currently have voxes in my army, nor do I think that they really fit with the theme. I may have to find a cunning "counts as" way around this, or just live without Platoon Drill.

Sadly, this will be too late to be of any help for my Astronomi-con army but depending on how they look could be very useful for future additions to my cavalry force.

- New Catachan plastics will have scaled down arms.

That'll probably be good for my Highlanders, but I really think that it's not that Catachan arms are too big, but that their legs are too small...

I was already intending to have Ogryns, so hot diggedy!


Picture updates tonight, as I should be finishing Green/C and hopefully have enough down on Green Platoon's Commissar to show him off (finally).
Posted by Malcolm Wilson at 11:13 AM 3 comments:

More work on the Command Squad. Aside from the Commissar, who is still in progress, they're pretty much ready for paint (once I finish the last half of Green/C). 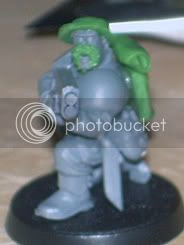 All fear the power of Chin Beard! 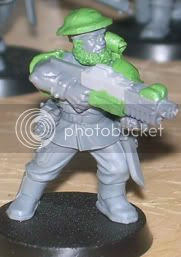 And the JO, proudly sporting a Lemmy. It doesn't really show, but he's got a pack and roll. It took three forums and this here blog, but I'm pleased with how he looks now. Thanks to everyone who made suggestions. 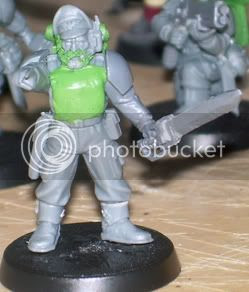 Another one in as many days. I'd almost forgotten what it's like to have a proper weekend...


The first half of Green/C, now completed.

The WIP Green/Command, minus the Commissar who I'm not yet ready to show off.

The first shotgunner. I'm still not sure whether I like his gun or not. Any suggestions on how to improve its shotgunny-ness? Does it need any more work? 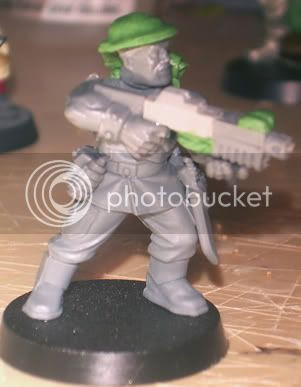 This guy is probably my favourite of the squad, with his sharpened entrenching tool and oversized knife. He still needs sleeves, though, as does the guy above. 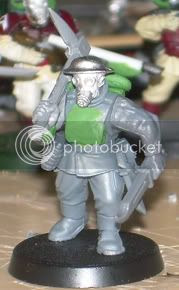 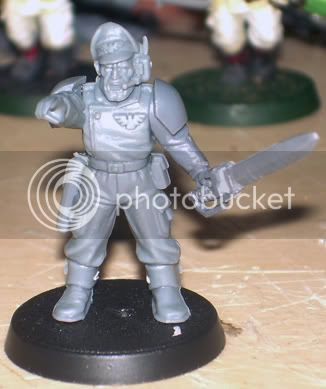 The Platoon Sergeant Major, who is probably the least converted model in the army... 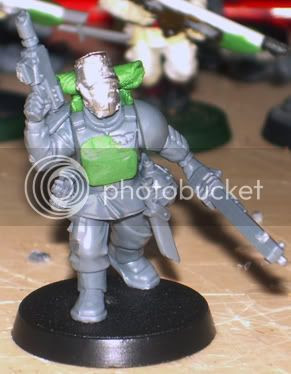 And the other guy with shotgun. 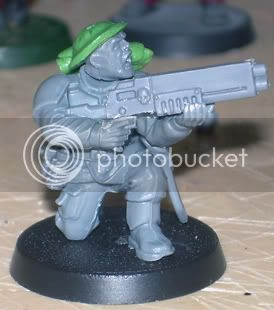