When we last saw our intrepid heroes...

Wow it's been a while... hobby time went the way of the dinosaur for the past few months for the usual stack of RL reasons I won't bore you with, but the time is come to move forwards with the Yukoni!

After spending some time with the new Codex (I've decided it makes me happy after all. The only thing they could've added to make me happier would be Imperial Armour-style immobile artillery like Thudd Guns, but I'll live) I've done some jiggery-pokery with the Yukoni. The new TO&E states that each infantry platoon consists of four infantry sections, a fire support section and a command section, plus attached Commissar. Each company consists of four infantry platoons plus a support platoon (heavy weapons, snipers, etc). To that end, I've almagamated a squad from what was Green platoon into Red Platoon to put me closer to having half of the core of my army almost done.

Oh, yeah, I also made a new list. You can view the first level, 1250 points, at the right. Once I get a chance to take some decent pictures in this weird light that isn't rain that we get a few weeks of in Vancouver summer I'll add 'em to the list. For the completed units.

To sum up the list, it's half an infantry company (ie, two full platoons), plus two platoon-level attached Mortar Sections, a squad from the Veteran Auxillia (I need to come up with a better name) and a Colossus. AP3 and no cover saves? Yes, please!

My only real gripe with the new book is that shotguns are now the sole province of Veteran Squads and I had previously been giving them out like candy to Sergeants and members of Command Squads. Alas. Inspiration struck, and my Veteran Squad will consist of seven Yukoni with shotguns, two Highlanders with flamers and one Highlander with a heavy flamer. Toast 'em and blast 'em! By stripping out members of Green Platoon's Command Squad, I now have exactly enough LP+CCW-armed Sergeants and Command Squad members for Red Platoon.

Lest your eyes glaze over in a fit of TL:DR and you think I reactived myself merely to present you with a wall of text, I have pictures! Admittedly, not much is new but they're pictures nonetheless.


A shot of the whole army so far, representing the reorganization. Red Platoon takes up the bulk of this picture. The only things left to do for them are: make a meltagunner for the Command Squad, finish the Fire Support Squad, and repaint the shoulder badges on the formerly Green Platoon squad.

The Veteran Squad. It's a bit of a rag-tag mix right now, but eventually I'll make two squads, one Yukoni and one Highlander. 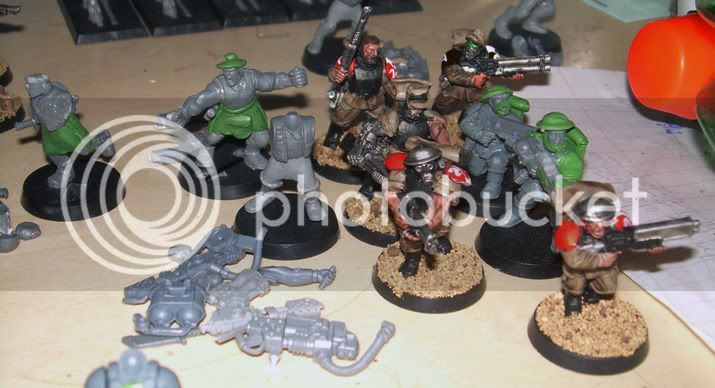 And two of Red Platoon's Fire Support teams. I actually did stuff on these guys last night, partially assembling the loaders and gunners. 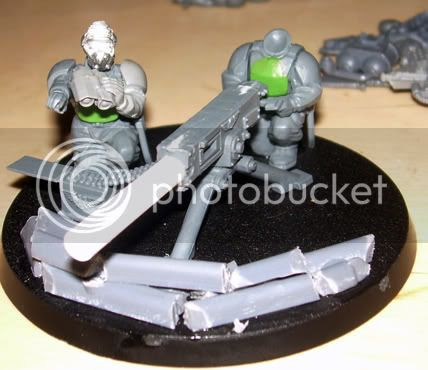 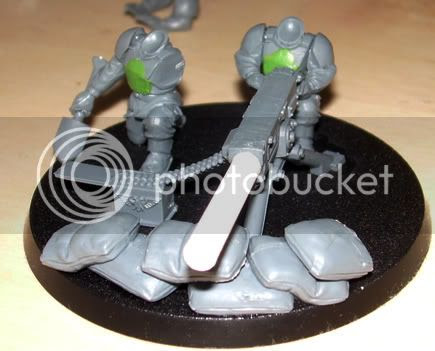 Until next time!
Posted by Malcolm Wilson at 9:22 PM