Green/Command, let me show you it.

Whee, Green/Command is done. I'm quite pleased with how the tartan on the pipes turned out, but of course the flash washed it out and made it look all pastel-y. Sigh. 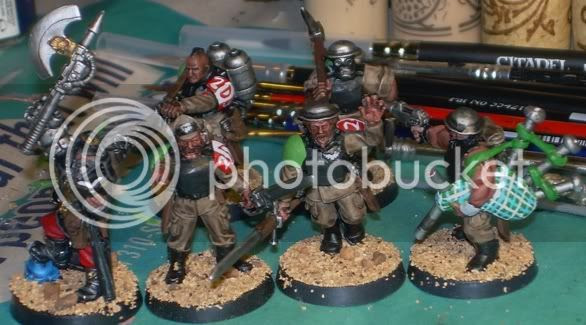 Now I'm moving on Green Platoon's Heavy Weapons squad. I decided a short time ago that between the artillery and bajillions of lasguns, I have plenty of anti-infantry firepower, but nothing to hurt high-toughness baddies or transports at range and thus needed to switch the heavy weapons squads to have Autocannons instead of Heavy Bolters. Not wanting to rip apart the existing squad or make new ones, I've tried to come up with a conversion to the heavy bolter body that still looks like an autocannon. I think it works, but I'd love some opinions. It means I'll lose the awesome Vickers MG look, but I'll just have to live with that.

Posted by Malcolm Wilson at 2:33 AM