Horses, Orphans, and Loonies Who Jump From Planes

Updates! They're not quite the updates I wanted them to be, as I appear to have lost my GS. As in, it's somewhere on my desk and I don't know where. Unfortunately, things being underneath other things is my personal kryptonite.

Anyways, here's the new cavalry, bringing the total up to five. Due to aforementioned lack of greenstuff, I haven't done their reins, carbine cases or bedrolls, but they're worth posting pics of anyways. 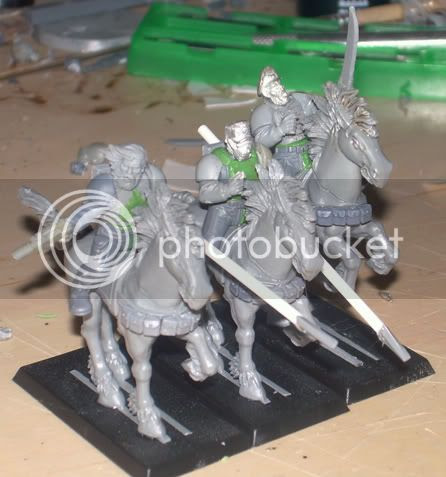 And a group shot:

And because I keep yapping about them, here's the newest War Orphans.

And finally, an in-progress Yukoni Drop Trooper. This guy was made on a whim, because I had parts for only a single dude left. I have no idea how I'll use them, if I make a full squad, but I used the incredibly cliched pose (I've seen it a lot, especially with Blood Pact, strangely) because I want to try my hand at sculpting a, uh, a hand. He carries an autogun instead of the usual Rosch lasrifle because I figure that you can't really properly flash-suppress a laser gun and a bunch on lunatics who insist on jumping out of perfectly good airplanes would need a gun that isn't guaranteed to give them away. 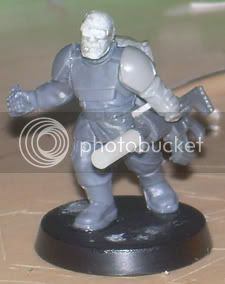 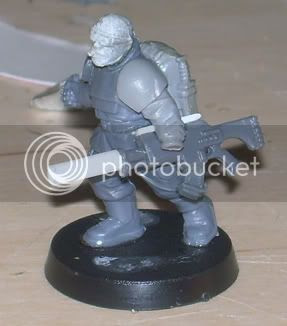 The lack of GS pretty much stymies everything I was going to do tonight, so maybe I'll build some terrain. I need a couple more buildings, and I think I've figured out how to make craters.
Posted by Malcolm Wilson at 10:04 PM