Well, I went for green over yellow, but the joke still sort of works.

I finished the first squad of Green Platoon just now. They were originally going to be Blue Platoon, but one look at them with those colours and all I could think was "American!" Not that I'm being bigoted, I just don't want my faithful infantry to look like, well, not Canadian...

And here's a group shot of all the completed infantry thus far:


Here's the next squad on the block, Green/B, with their dynamic-tastic Sergeant.

Also, just on a whim, I made another Drop Trooper. I'm really liking the idea of fielding a few of these guys as Last Chancer. Just a couple of solo or paired models with big guns doing damage, infiltrating to get side armour shots, Outflaking with meltaguns... And if they get whacked, no big deal. My opponent just spent at least one unit's entire shooting round (or more, if I'm smart about cover) to kill twenty or fifty points. 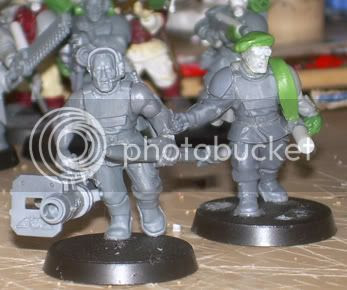